Kofi Annan: In Service of the World 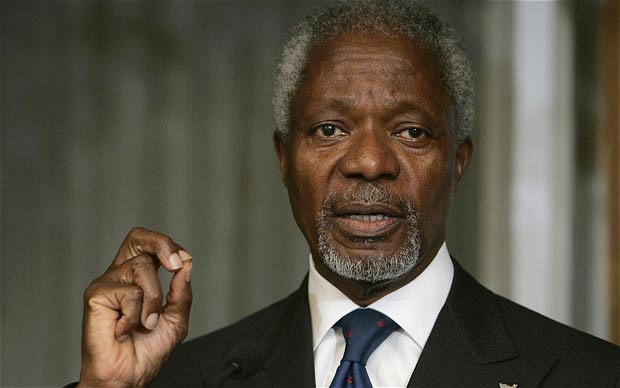 During his tenure as Secretary-General, Kofi Atta Annan frequently reminded the world that “there could be no development without peace, no peace without development, and neither peace nor development without human rights.” That perspective embodied his deep aspirations for global peace and prosperity but, paradoxically, also reflected the bitter lessons of experience learned in many conflict-afflicted zones in the world, not least the Rwanda and Srebrenica genocides in the 1990s, which occurred during his tenure as the Head of UN Peacekeeping Operations.

Kofi Annan’s contributions to peace and security were wide-ranging, encompassing efforts to discourage needless conflicts, support peace operations, create or nurture institutions for peacebuilding, and develop norms and policies to promote inclusive development. Annan had presciently opposed US and UK 2003 invasion of Iraq. Ahead of the invasion, during a meeting with visiting high-level British officials in New York, Annan was pressed hard to abandon his position and insistence on a Security Council resolution. Annan held his ground, prompting Adam Thomson, then UK Deputy Permanent Representative, to quip, “SG, the coalition will proceed with or without UN support,” to which Annan retorted, “Ambassador, there comes a time when delusion meets with reality.” Today Annan’s position stands vindicated.

Annan, unlike Boutros Boutros-Ghali, was not steeped in African politics, but his commitment to durable peace on the African continent was immense, a fact reflected in his 1998 landmark report on the Causes of Conflict and the Promotion Durable Peace and Sustainable Development in Africa. Annan oversaw the massive peacekeeping deployment in response to rising conflicts in Africa, with about fifty percent (7 of 15) of UN peacekeeping operations and about eighty percent of UN personnel (69,238 of 87,764) deployed in Africa at the end of his tenure in 2006. Even after he stepped down as Secretary-General, Annan showed his commitment to promoting democracy and good governance in Africa, most notably by mediating between the parties to the post-election violence that erupted in Kenya in 2008. He also pushed hard for political reforms in Zimbabwe, but not regime change sought by Western nations.

Annan successfully canvassed for “humanitarian intervention” as a possible preemptive alternative to peacekeeping, though some suspected it was a policy not born of personal conviction, but as a safeguard against repeat of mistakes such as those in Rwanda and Srebrenica. Annan bought into the concept of “sovereignty as responsibility,” which gained impetus in 2001, well after Nelson Mandela publicly warned his fellow African Heads of State during the 1998 OAU Summit in Ouagadougou, Burkina Faso, that “Africa has a right and duty to intervene to root out tyranny.” The resultant policy was the legitimization of the “responsibility to protect,” which though salutary, had a detracting flipside; most Africans worried that “responsibility to protect” would give carte blanche to meddlesome global powers.

Inspired by fundamental principles of the United Nations Charter, in particular, the notion of “promoting social progress and better standards of life in larger freedom,” Annan launched a number of human security initiatives to help people stricken by disease, poverty, and war. The Global Fund to fight AIDS, Tuberculosis, and Malaria stands as a testament to his effort to mobilize the global response to tackle the scourge of these three diseases around the world. The Millennium Development Goals, agreed at the UN Millennium Summit in 2000, was yet another initiative designed to fight poverty, which was the first of the eight goals. The establishment of the UN Peacebuilding Commission, whose creation Annan described as “filling the gaping hole,” in the institutional framework for post-conflict reconstruction and development, represented an important step in galvanizing international support for countries emerging from conflict.

Annan realized much earlier than many that in an era of globalization, a strong partnership with the private sector was required to make progress on many public policy issues. This provided the impetus for his advancing the idea of the Global Compact, which aimed to encourage global corporations to embrace principles relating to the promotion of labor standards, respect for human rights, protection of the environment, and combating corruption. Annan himself declaimed in a 2000 report that “weaving universal values into the fabric of global markets and corporate practices will help advance broad societal goals while securing open markets.”

It is broadly acknowledged that “policy is most often limited less by some objective reality than it is by conceptual barriers of a statesman’s imagination.” The breadth and scope of policy initiatives launched by Annan and efforts exerted by him in the area of peace, development, and human rights showed that he understood fully the dynamic nexus between these issues. But more importantly, he appreciated that the countries of the world must act in concert to achieve peace and prosperity. It is not for nothing that Annan has been described as a diligent man of peace. It is an accolade well-deserved and affirmed by the Nobel Peace Prize awarded to him in 2001. Yet, when things went wrong—and they did occasionally—and UN member states sought to lay blame on him, he was never bashful of self-deprecating, saying often that “SG,” the acronym for his secretary-general title, was a sobriquet for “scapegoat.”

Ejeviome Eloho Otobo is a former director and Deputy Head of the UN Peacebuilding Support Office at UN Headquarters in New York, where he acted as Assistant Secretary-General from February-August 2009.

Oseloka H. Obaze served as a UN Official at its headquarters in New York from 1991 to 2012. He is the MD/CEO of Selonnes Consult, a policy, governance, and management consulting firm based in Awka, Nigeria.