Book  Review : A peep into an extraordinary life: A review of Sons of A Priest 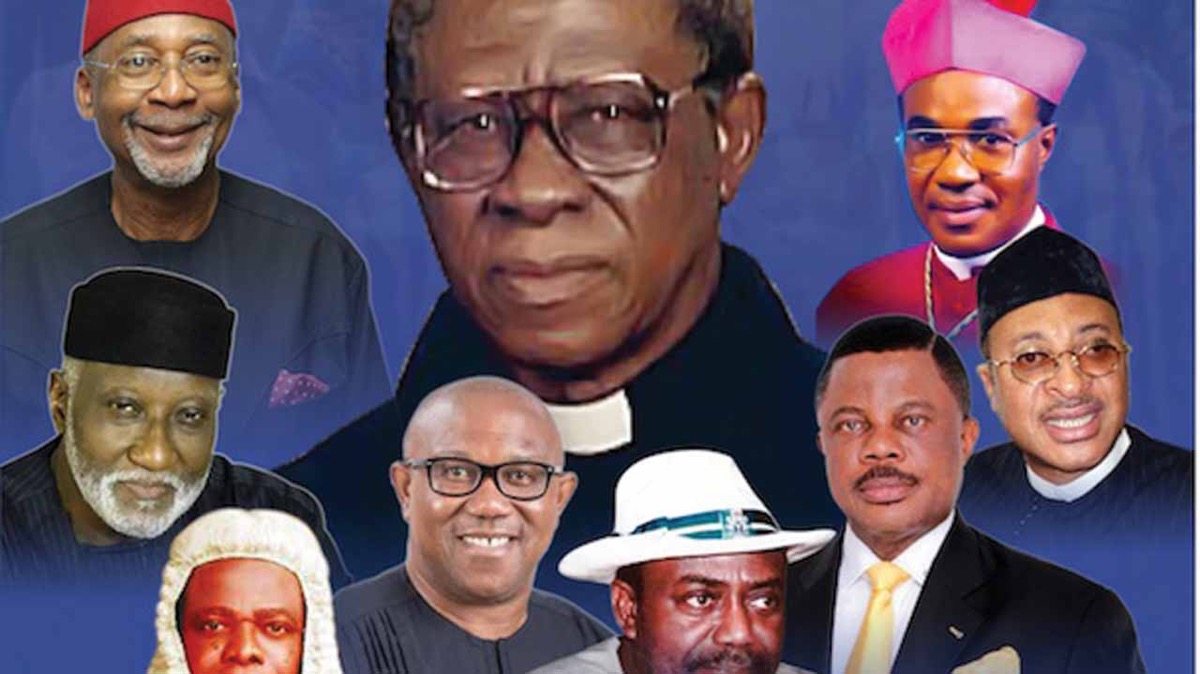 Sons of a Priest is a book big in size, profound in content, diverse in its views and as complex as its subject– Very Rev. Fr. Nicholas Chukwuemeka Tagbo OON (1929-2016). Reading through the insightful foreword by Willie Obiano, the notes of the editor, the detailed introduction provided by Oseloka H. Obaze and the very personal biography carefully told by Fidelis Ezemenari and kindly titled “A Letter to Rev. Fr. Tagbo,” the reader instantly gets the feeling of being about to embark on a journey of beautiful tales by sons eager to gush with praises at a dear father. To conceive of a project like this is nothing but a show of intellectual boldness and humility at being awed by the influence of another. To follow it up to a logical conclusion, demands of courage and material muscle.

Sons of a Priest is a 286-page coffee table book printed in glorious colours –a sheer testament to the confetti of emotions suffused into its production. It has contributions from over 120 past students in its main section. It has very colourful pullout which begins with “Other CKC Greats” and cascades into a centerspread of the 1977 CKC World Students’ Soccer Cup Team. The pull out further spills into a section called “Other Sons of a Priest.” The book closes with two key areas – one of “Tributes” dedicated to the burial ceremony of Rev. Fr. Tagbo and the “Interviews” section –of the book. It finally settles with an emotional story, on page 282, told by Amaka Cypriana Uzoh, the daughter of an old boy and the granddaughter also of an old boy –who joined CKC Onitsha when it was founded in 1933. While telling the funny story of how she, all along, thought that CKC meant “Seecasey,” Amaka draws the attention of the old boys to the current physical state of Christ the King College and the need for them to act fast.

Without doubt, coffee table books of this quality are mostly projects sponsored by governments, large corporations or works of art that are funded with grants from international donors. For Christ the King College old students to embark on this with the author, in honour of their principal, shows the level of love Rev. Fr. Tagbo’s students have for him. I, probably, am forced to agree with the editor when he describes the book in his notes, as “sheep speaking back to the shepherd.” I can only add that this herd of sheep is clearly speaking back to its shepherd with hearts full of love, and more understanding than sheep are often given credit for.

On a critical note, is Sons of a Priest truly speaking back to Rev. Fr. N.C. Tagbo? The answer is yes. The array of contributors which, includes but is not limited to, a sitting governor, two past governors, serving Archbishop of Onitsha, past senator, federal and state permanent secretaries, SSGs, top diplomats, intellectuals, professionals, legal luminaries, artists, actors, writers, businessmen and everyday people attest to this. The book has managed to give everyone the voice to speak back and it is clear that those who can and want to have used this medium to do so eloquently.

With Sons of a priest, Ujubuoñu has documented, with the vehicle of words and pictures, the “collective emotions” shared by CKC Old Boys between 1963 and 1985 for posterity. To the best of my knowledge, there does not exist anywhere, any single volume that chronicles any school principal in the manner CKC Old Boys have done in this text in today’s Nigeria. Sons of a Priest is, therefore, far beyond the celebration of Rev. Fr. Nicholas Chukwuemeka Tagbo but a gift to the world to share the unique experiences of the students under this great man.

It goes without question that the book will make an appropriate text for students and practitioners of school administration, child psychology, leadership and sports administration. Importantly, parents, priests and the religious who are involved in raising young men would also find it invaluable, especially while searching for that hidden secrets of turning base metals into gold – making ordinary boys great leaders. In the words of one of the contributors, Arc. Tony Maduabuam, “No one who encountered “Nicho” ever remained the same. His spirit of Excellence lives on in many of us.” Maduabum tells the story of how from the first day, Tagbo returns as principal in 1973, he stamps his feet and leaves an imprint on the mind of every student. “There is no doubt that power has changed hands and that things will no longer be the same because a new Sheriff just entered town.”

Every story in this book resonates a continuous ring of the words of our Lord, “I know my sheep and my sheep know me.” Rev. Fr. Tagbo Knew all his students by name and each, in these stories, relates how much of his weaknesses Tagbo knew and how he tried to help him in his peculiar circumstance. For many, he used the cane, which according to Onyechi Ikpeazu, “he stowed away in the long sleeve of his immaculate soutane,” and then for a good number, he used kind words, like Olumese narrates in his own story. For him, Fr. telling him, “You are an asset” was just enough to bring about his own turn around. For some “recalcitrant” students, they needed his constant baying day and night to experience their epiphany moment. Yet for others, it was just discovering the internal noise (special talent) in them and directing each child to his passion that woke the giant in them. This is clearly the case of Cyprian Uzoh who is, today, a world acclaimed inventor in the USA who dedicates the first twenty-five of his more than two hundred and fifty invention patents to Tagbo. Cyprian tells his story with a sincerity that etches eternal marks on the mind of the read. His journey had a difficult beginning but a happy ending with Tagbo being the catalyst for everything good in his life.

As the reader flips through the pages of this beautiful book, she embarks on a journey through the over 85 years of the existence of Christ the King College, Onitsha carefully laid bare in both monochrome and coloured images. Of remarkable note is the beautiful picture tagged main block and school chapel before erection of the wall found on page 13. There are also, other soul stirring pictures of Fr. Tagbo at the different levels of his health, age and duties which help bring the stories alive. The 1949 Set picture captured in page 20 is an award-winning effort in this regard. To fish out a picture of Father Tagbo’s class is an incredible feat that shows the efforts put into this project. One other illuminating section of this text is the part titled “Tributes” which is a collection of odes, and eulogies to Rev. Fr. Tagbo by his numerous students and peers following his demise in July of 2016. This section unlocks the emotions of his students. The Poem, Irokolussus by the popular Nollywood Actor, Emmanuel Ayalogu is a must read and Odili Ujubuoñu’s seminal piece in Thisday of July 18 2016 culled into the book, says it all – “I write this with the ink of tears. I write it with hands shaken by memories and pain. Pain, not of regret or unhappiness but one which draws from that certainty of truth you know is and would never change.”

For all its praiseworthy beauty and quality, Sons of a Priest cannot be called a perfect work. A further probe into its content raises a couple of questions. How relevant is Rev. Fr. Tagbo’s leadership style in today’s school’s administration? How many parents of today would be willing to fully entrust the powers of guiding their young children to the principal of a school as the parents of the chroniclers of Sons of a Priest did in their own time? With the heavy influence of Western system of education, on the parents of today, wouldn’t they frown at some of the style and techniques used by Rev. Fr. Tagbo in the upbringing of the children? Specifically, wouldn’t he be termed a terrorist for making the children fear and over respect him? Wouldn’t he be called an abusive principal for his flagrant use of the cane? These questions are not answered in this book and Ujubuoñu does not broach them or even give a guide to the reader to finding answers to them.

This is a major flaw of Sons of a Priest. In addition, Ujubuoñu tips it a little over by taking a self-licensed overdrive in creating sections in the book that have no direct connections to the title. What relevance, if I may ask, do the sections, “Other CKC Greats” and “Other Sons of a Priest” have in the story apart from letting the reader know that these gentlemen were also in CKC? The writer could have spared us these sections of the book and probably considered them as titles for his future endeavours.

Having said that, the width of work, depth of its content and the weight of industry invested in bringing this work to be are more than commendable. Odili Ujubuoñu, in this his first major work of non-fiction, has created for himself and other writers, journalists and historians a new industry of chronicling the humble, the unsung and unknown with the voices of the well-sung, the important and celebrated of society. The writer’s ThisDay article, on Page 236 summarises how these men see their late principal, “He gave up his life ambitions to make us rule our worlds. Tagbo was satisfied to be just a principal and a priest while some of his classmates in Christ the King College became bishops and one would later become a cardinal. He gave Nigeria over twenty Senior Advocates of Nigeria and remained an obedient citizen. He raised men who became GCON, CON, CFR, MFR etc. but was content and very proud to be honoured with just an OON. He produced three state governors while he remained a simple priest in a local parish. He had over a hundred billionaire businessmen as his sons yet he remained faithful to his vow of poverty as a priest. He trained boys that became Chief Judges of about four states and senior judges in courts across Nigeria, yet he ended as Citizen Nicholas. His bell of humility tolled twelve when he happily lived as a poor old priest under the current Archbishop of Onitsha Diocese, Valarian Okeke, who was once his obedient student in Christ the King College.”

Odili Ujubuoñu’s Sons of a Priest will be celebrated for its simple use of language, intellectual ventilation and ability to draw the interest of the world to a school that continues to reinvent itself day after day, year after year since 1933.

This book should be found in the library of any secondary school that is worth its salt in the world, every home that has a male child and in churches and other places of faith. Sons of a Priest is one of the best books I have read this year and I recommend it for its humour, wits and crazy pranks boys played and will always play.

For a bonafide rascal who discovered discipline and surprising compassion in his principal, it is such an honour to write the review–a peep into an extraordinary life.
Culled from : https://t.guardian.ng/art/a-peep-into-an-extraordinary-life-a-review-of-sons-of-a-priest/.