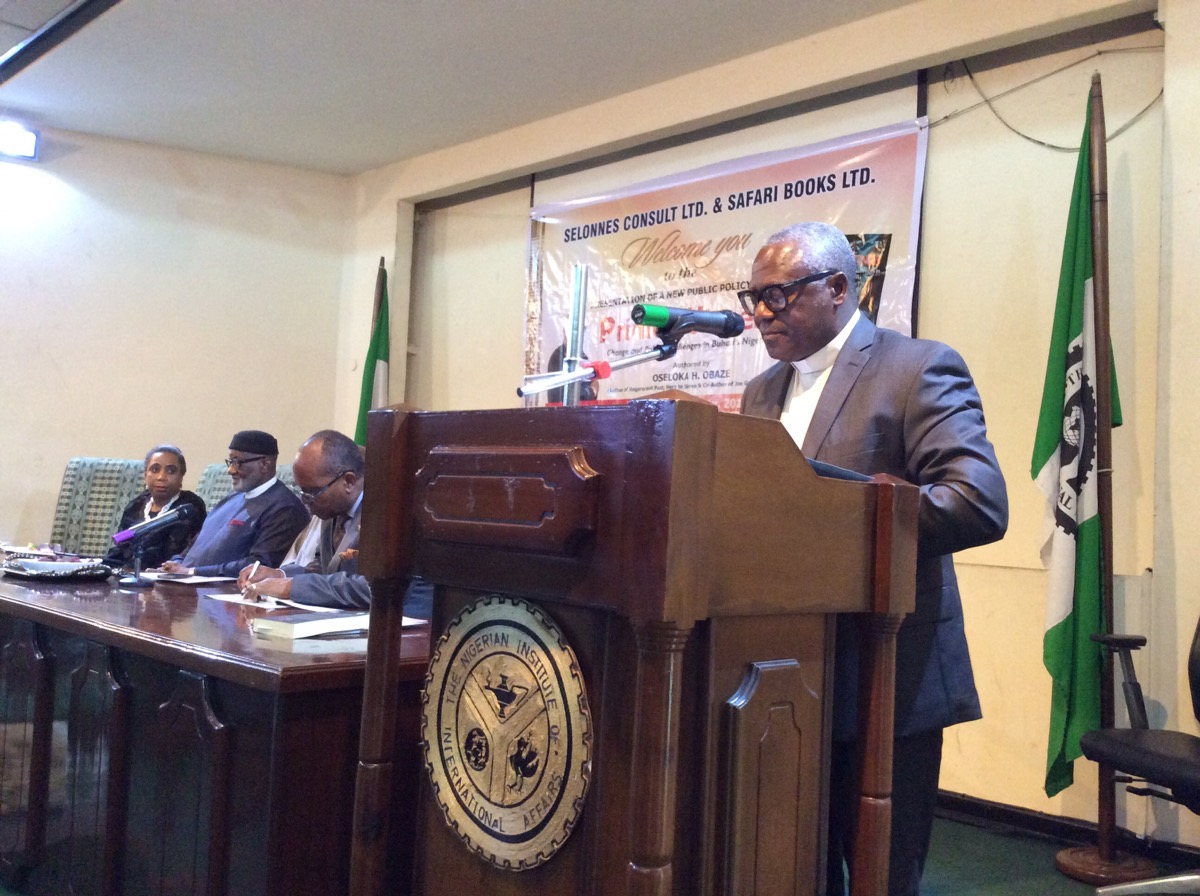 Prime Witness: Change and Policy Challenges in Buhari’s Nigeria as authored by Oseloka H. Obaze who has proved himself extraordinarily creative in making his inspiration, dream and idea manifest creativity by writing this book. The book has 62 preliminary pages and 448 main pages. Part A is on “Governance and Politics”.

Part F is the final section on “Change Mantra in Retrospect” and has three chapters (pp. 279 – 384). Typical of a work of this nature, the chapters are not evenly divided in the Parts. The Introduction and the final chapter (in Part F) are out of proportion to the rest of the chapters.

It also clearly shows some measure of independence of the chapters which is expressed in the confession of the author in these words: “I did not set out to write this volume as a book. Rather, this project which is a collection of essays commenced with several random public policy analysis, which I wrote with the advent of the Buhari administration on 29 May, 2015.” This does not, however, rob the book under review of external coherence and internal consistence that add to the juicy nature of the masterpiece.

As a seasoned diplomat and policy advisor of international repute, Obaze presented the realities on ground before Buhari, who had failed in his Presidency race three good times, clinched the seat at the fourth attempt in 2015. Nigeria’s political history is not holy and wholesome.

Within both civilian and military regimes, the story of Nigeria continued to grow n negativity. The military years were to borrow from George Ehusani, “Years eaten by the locust”.

Regime after regime blamed their predecessors of condoning ills in the country especially with regard to corruption. Regime after regime promised paradise on earth in ascending to power to legitimize that power which is seized either by the brute force of coups or by election, generally feared or believed obviously rigged. The Goodluck Ebere Jonathan’s administration was not different.

The author is of the view that that administration under the platform of the People’s Democratic Party (PDP) had lost the fibre of leadership by 2015. He exercised the power of research objectivity to indicate that, the party had failed Nigerians who then clamoured for change.

According to him, “it was evident to all, that Nigeria was not enjoying the best form of governance and purposeful leadership. The strength of governance was absolutely lacking…. “Governance had reached new depths of dysfunction. The nation was tethered close to its tipping point and the political alternatives were few. Military rule was totally discredited and hence no longer an option.”

There was therefore need for change. Even at that, he says that “desirable as it were, leadership change in Nigeria had always been a risky proposition.

Yet the need for leadership change was keenly felt.” It was that political environment and the consolidation of the All Progressives Congress (APC) that “was fractious, unconsolidated and therefore weak” that brought Buhari to power. But, it is not just leadership change; it is a change in the structure of governance in such a way that the gap between the government and the people would be bridged.

That was the yearning of the people. It cannot be said with all boldness that it has been achieved by the APC government either. To achieve this is the function of public policy that is the major concern of our author. According to Obaze, public policy is made for what is generally called the common good, for protecting the interest of all in the polity; it serves public interest.

As such, when well formulated and implemented, it projects good governance and is “vital for nation building.” That is why, in his opinion, “public policy and governance are intertwined inextricably.”

It is so complex that it is not a function of one person or a single group in a country, especially as is as complex and pluralist as Nigeria. Public policy calls for broad consultations and debates for policies that would establish connect between government and the governed.

Obaze gives “certain realities and theoretical constructs” that remain unchanged in assessing the effectiveness of public policy in governance. “First, the strength of government derives from its delivery of good governance and public services. Second, delivery of such governance dividends depended on the efficient formation and implementation of public policies.

Third, the sum total of good governance, has always hinged on the level of the bond of performance between the government of the day and the governed.” Obaze proposes this “groupthink syndrome” as the best way to make the leader to think out of the box to arrive at public policies that would bring about “pragmatic means to problemsolving.” At both the overt and covert dimensions, “public policy, by nature, represents a thought process or continuum rather than a “time-bound event.

It could, therefore, manifest as government action (explicit policy) or governmental inaction (implicit policy).” It is with high knowledge of the nature and function of public policy that the author analyses the Change Mantra and Policy Challenges in Buhari’s Nigeria. Change mantra is not new in Nigeria’s politics. Nearly every regime that comes to power promises change from the “ills of the preceding administration. That may possibly explain why there are no sustainable viable policies in Nigeria. ”

Obiefuna is a Professor of Religious and Society/Human Relations, Nnamdi Azikiwe University, Akwa