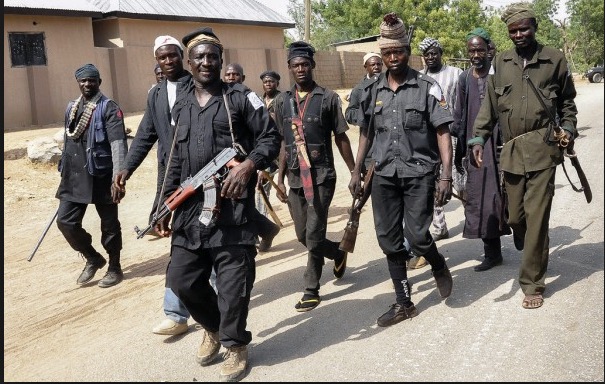 In July 2021, about 1000 hunters were inducted to join the multitude of state-sanctioned groups holding forth against Jihadist fighters in Nigeria’s northeast zone. For eleven years, armed insurgents have unleashed mounting terror in the northeast and the broader Lake Chad Basin (LCB). The ugly years have elicited military combat, even beyond Nigerian borders. The Multinational Joint Task Force (MJTF), a combined military unit made of personnel from Nigeria, Niger, Chad and Cameroon, has come together to wage war against insurgents in the LCB. Beyond formal security structures, informal setups also exist. The Civilian Joint Task Force (C-JTF), a “voluntary” non-state armed group made of hunters and local vigilantes, complement formal securitisation measures in the northeast.

Military efforts in the conflict zone appear overstretched. However, needed additional combat support must be strategic and regulated. Nigeria’s security agencies are agreeably overwhelmed by the assortment of security issues demanding attention. Military units have been deployed to quell internal disturbances in 30 out of the 36 states of the country. Therefore, additional combative support against unrelenting insurgents in the northeast is ideal. This collaboration window currently exists with the presence of the C-JTF, but such arrangements must be regulated. The addition of 1000 hunters to protect farmers, who otherwise may be vulnerable to insurgents’ raids in their farmlands, re-echoes the need for such regulations.

Too many hands may be handy if adequately regulated. The multiplicity of actors on the Nigerian side against insurgents may appear to be the available solution to manage overwhelmed security personnel. Nevertheless, it may also pose a challenge to counterterrorism measures in the region, in terms of coordinated securitisation, clear understanding of inherent sensitivities in the region, identification of non-state armed groups on the Nigerian side and the regulation of their activities, and also the sensitisation of residents on the existence of such groups. In June 2020, the Borno state government inaugurated a Community Policing Advisory Committee to improve harmony and collaboration between the police and communities. The state government set up a Rapid Response Squad (RSS) within the same period to protect farmers from terrorist attacks. The new recruitment of 1000 hunters to the guide farmers adds to the large pool of security personnel in the troubled communities.

There is a need for informal security units to be regulated in line with conflict and cultural sensitivities in the region. Community policing or informal security units must hinge on the assumption that such platforms’ idea is to securitise communities and not pique entities against entities. The northeast’s security condition is far from checkmated such that informal security actors will continue to increase. Therefore, the creation of supposedly supportive security units must be preceded by adequate awareness training sessions to enhance their knowledge of securitising live in conflict zones. Neutrality and professionalism will help avoid the looming dangers of tensions between informal security divisions and communities, including those displaced by the insurgency. A robust punishment and reward strategy within the security organisations will help shape the conduct of security personnel in the field.

Security efforts in the region should also be synergised for a common purpose. Every group, particularly the non-state, should know its objectives and areas of responsibility. Having multiple groups and committees in the region may be at variance towards a solidified front against the jihadists. The government should seek a centralised control for all the combative and non-combative agencies established in response to the jihadist violence. The northeast conflict requires coordination, tact, and strategy as much as it requires adequate security personnel holding the Nigerian turf.