Africa’s Vision Merits a Niche in the Contemporary Poetic Canon 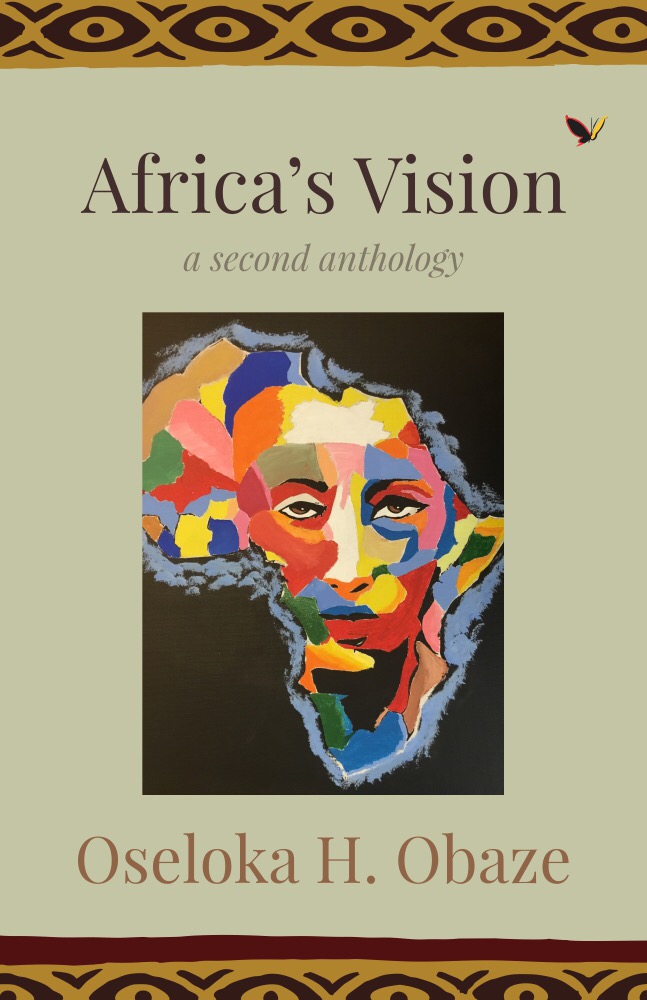 Africa’s Vision is a collection of 125 poems of Oseloka Henry Obaze’s. Significantly, it is dedicated to ‘the children of Africa, yet unborn.’ A substantial portion of the anthology is personal: spirituality and divinity, sensuality and humour, parenthood and death. Some of those poems might be appraised. A Decade Shy is Obaze’s musing on attaining the age of sixty. There is the enchanting One Dimple Kumquat, a paean to the choice, citrus-like fruit, kumquat. Obaze deems that fruit unsurpassed! He asks:

Should Eve have offered Adam an Apple?

Or would a Kumquat have sufficed?

The collection includes the elegiac. Tagbo is Obaze’s eulogy of his school principal at Christ the King College, Onitsha, Rev’d Father Tagbo. He praises the priest/educator’s insistence on honesty, on taking the course of the ‘harder right,’ rather than the ‘easier left.’ There is also A Dirge for Mugabe, and Prince Snatched, about the musician Prince Rogers Nelson. Opia Fog, intimate and romantic, details instant magnetism of strangers.
If I Die is an affecting poem about living and mortality. It echoes Rupert Brooke’s famous World War I sonnet, The Soldier which opens with the iambic pentameter ‘If I should die, think only this of me’, and JP Clark’s My Last Testament. However, most of the poems focus on public issues, the bent and blights of contemporary Africa. This leaning is in consonance with the book’s dedicatory statement. The poems are lamentations, documentaries and exhortations.

Indeed, Africa’s Vision appears to have expounded every issue that affects Africa and Africans. Africa’s Vision features climate change, Nigerians’ predilection for begging and for titles, repulsive affectations, the aquatic, xenophobia, politics, blackouts, challenges of parenthood, youths’ afflictions and recklessness, wars, the uses and dangers of modern technology, the terror of traffic jams in Nigeria and challenges of Africans in Diaspora, rapturous religious worship and many other issues. The poems exude passion and piety, humour and horror. Africa’s Vision’s stance – engagement with a continent’s realities – echoes Chinua Achebe’s abjuration of art for its own sake (l’art pour l’art). L’Art Pour l’art was a doctrine upheld by the 19th century luminaries, Walter Pater and Oscar Wilde. Achebe’s repudiation of it included alluding to the Igbo proverb about the idiocy of someone chasing rats while their house is burning! Obaze’s concern for his nation is manifest from the first poem in the collection, Irony Nation. It addresses a grievous phenomenon in Nigeria: the menace of herdsmen. The situation that Obaze remarks is that students roam the streets, while school grounds are occupied by cattle and cattle-rearers.

In The Herdsmen, Obaze decries that hitherto peaceful keepers of cattle, had become murderous. It is of utmost topicality in Nigeria.

To them, cattle prevail over human lives.

Time has so changeth!

No, not the peaceful, harmless, pastoralists,

No, not mere pacifist interlopers,

These are relentless, vicious,

Whose signature is visceral violence,

Also reflective of national concern is the poem, Nigeria in 2019. 2019 was the year of federal elections in Nigeria.

We stand seduced by her allure and frivolities

It’s painful to stay with her,

Even more painful to abandon her.

But we stay, to salvage her;

And hopefully, make her whole again

For aficionadi of romantic verse, this poem compels recall of Percy Bysshe Shelley’s England in 1819.

Two other poems of a public nature might be remarked. Africa’s Vision, the title poem, celebrates the continent’s virtues and resilience, and voices unfaltering hope in her future.

So too her potentials of inventiveness,

Her audacity in willing a modicum of hope,

For her teeming masses and her unborn children…

In Wars, Obaze laments the ravages of war, yearning for a utopia where wars are banished:

There’s nothing subtle about wars,

He ultimately espouses the famous paradox that those who seek peace must be resolved to battle!

Would it not be wiser to banish wars?

Doing so requires war or capacity to wage war…

I am minded to highlight a few other items. Procrastination is arresting. It acknowledges the insidiousness – and plagues – of indolence. It echoes various aphorisms: procrastination is a lazy man’s apology, time waits for no man, and the Biblical strictures: ‘Through sloth the roof sinks in, and through indolence the house leaks’, ‘like vinegar to the teeth and smoke to the eyes, so is the sluggard to those who send him.’ The poem treats its subject with wry compassion, and warns of its dangers:

Procrastination is no ally

Bitter Sweet is a short, insightful and piquant statement about truth. It deserves to be reproduced in full.

Salvaging, even if hurting,

Yet in redeeming moments,

As sweet as honey

Charming and instructive is the author’s modesty in the preface. ‘Once again, I can claim to be a poet; but of what genre, generation and classification? I remain humbly uncertain…’ the genre espoused by Obaze is ‘free verse.’ The 19th century American, Walt Whitman (‘the good, gray poet’), is widely considered ‘the father’ of free verse. It is popularly recognized as poetry devoid of meticulous metrical structure and end rhymes. Free verse has frequently earned its reputation for sloppiness, for being the ‘cop-out’ of writers quailing at the exertions of careful crafting. Obaze’s free verse however, recalls T.S. Eliot’s: ‘no verse is free for the man who wants to do a good job.’ Obaze’s free verse is definitely not free! It reflects much skill and erudition. Scoffers might call it pretentious, but none could dismiss it as pedestrian.

The poem, Omambala Calvary is proof.

Mutations of near ancient history,

Caused quite a kerfuffle in the arena

Also relevant is Imagine, a captivating stream of consciousness.
Enculturation of values of unrequited goodness,

Credence in a modicum of hope for humanity,

That untainted compassion from the inner-self,

Devoid of any recompense, or expectations

To induce negativism that upends realism,

And traduce without limits; eroding trust,

The many ‘public’ poems in Africa’s Vision illustrate a certain fact. They are not mere complaints or catalogues of contemporary crises and conflicts.  They succeed as works of art: that is their triumph. Like the ‘personal’ verses, they abound with lilting phrases, cadences, lush imagery, arresting alliteration and assonance, irony, concision and adroitness. Many of the items in the anthology prove that accomplished poetry should not always be understood. Fine poetry sometimes bewilders, exasperates, or enthralls, engaging with the soul rather than the intellect. This appraisal might conclude with an excerpt from Faith and Fate. The last poem in Africa’s Vision, it proclaims the supremacy of faith.

But faith even if brutalized waxes on,

Holding to another time, place and promise,

That promise to meet the Lord in the air,

Subsist beyond all earthly things.

That is our faith. And our fate

Africa’s Vision merits a niche in the contemporary poetic cannon.

* Ofodile, the author of From Sin to Splendour, has had a varied legal and artistic career. He has won the BBC African Performance, the World Students’ Drama Trust and Warehouse Theatre International Awards. 15/11/2020