Is Peter Obi not one of us? 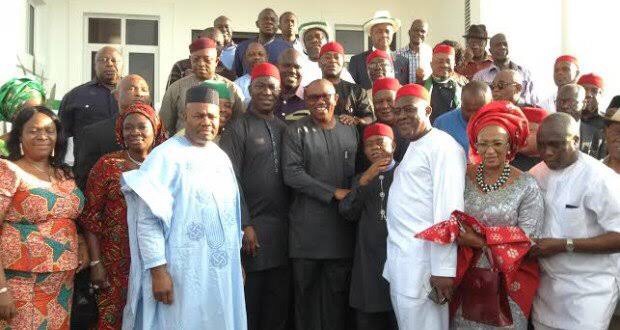 Remarks By Mr Oseloka H. Obaze, PDP Candidate in the 2017 Anambra State Gubernatorial Elections,At the Emergency Meeting of PDP South-East Zone, held at 3p.m. On 13/10/18,  At the Enugu Zonal Office, 16 Iyienu Street, Independence Layout, Enugu.
Mr. Vice-Chairman, we have been summoned here to deliberate on a very important issue. Although, my understanding is that we are gathered to articulate the way forward for Ndiigbo, I suspect that as always, they are some of us here, who will display their skills of pulling their relatives and friends down. What I’m about to say comes from the heart and from my personal experience. In 2017, I ran and lost a governorship election, not because I was a bad or unqualified PDP candidate, but because some within my PDP family in Anambra and beyond worked against me. Today, our state and our party are paying the price, even as I have forgiven those who worked against my candidacy.

On today’s agenda, I will resort to a historical narrative. On 6th October 2014, a PDP delegation led by the Deputy Senate President, Sen. Ike Ekwerumadu and Chief Olisa Metuh, the then Publicity Secretary, who represented the National Chairman of the PDP, Mr. Adamu Muazu visited Peter Obi at his residence at 22 Niger Drive, Onitsha to ask him to join our great party, PDP.

In the words of Chief Metuh, the visit was as a “result of the resolution by the entire South-East to pay him a visit and persuade him to join the PDP for more meaningful contribution to national affairs.” In his response, Mr Peter Obi, told the PDP party bigwigs that, “I am humbled by the visit.” Furthermore, he said, “I thank you for your continued belief and commitment to the welfare of our people and the progress of our country. I have in the past worked closely with all of you and you know my belief about our zone working together. I assure you that we will continue to work even closer as a team in the interest of our people. Regarding your visit of today let me assure you that I heard your kind and passionate requests and that your journey would not be in vain but in the best interest of our people. “Thereafter Peter Obi joined PDP.

What Changed? Is Peter Obi not one of us? In our language, “even a mad man has relatives”; whom you may only identify when the mad man is being beaten in public and they come to his defense. Similarly, in American politics, there is an instructive saying; “he is a son-of-a-gun, but he is our own son-of-a-gun.” I have not been in partisan politics long, but I am a political scientist by training. And I do research and write, so let me share with you some basic historical realities. We are talking of Zonal consultation on the vice presidential ticket. When did it start? Or is this meant to be a first?

In 1979, Shehu Shagari did not consult south-east NPN before choosing Alex Ekwueme as his running mate. Indeed, Ekwueme who was then resident in London had been introduced to Shehu Shagari by the late Sir Joe Nwankwu. In 1999, Olusegun Obasanjo did not consult the Northeast PDP leaders before he selected Atiku Abubakar. Indeed, Atiku having won the gubernatorial election in his state was driving to Adamawa on the fateful day when he got a call to return to Abuja to meet Obasanjo and become his running mate. In 2007, Umaru YarAdua did not consult the south-south PDP leadership before picking Goodluck Jonathan. Rather,after Peter Odili was blocked as presidential candidate, it was James Ibori that YarAdua wanted as his running mate. It was the trio of Ahmadu Ali, Olusegun Obasanjo and Tony Anenih who decided, without any consultations with the region on Jonathan in order to block some PDP governors who were scheming to nominate another person after the rejection of Peter Odili as presidential candidate.

In these three instances, I mentioned, the respective regionsembraced rather than repudiate or reject their sons. Will the turn of southeast be different? Quo Vadis Ndiigbo? Are we to understand that after we have waited for thirty-five years to get a VP slot on a PDP ticket that is a winning combination, we are about to waste it on account of our not being consultedzonally? Would we rather the VP slot go elsewhere and wait another 35 years? How do we explain our malign attitude and that outsiders have accepted one of our sons, but we are the ones that seek to tag him “an outcast” and therefore unacceptable to the nation? What is it we seek at the bottom of the pot but fish?

Mr. Vice-Chairman, the Biafran war ended 48 years ago and the Igbo nation is yet to recover fully. Now a historical opportunity beckons; an opportunity to actualize the mainstreaming of the Igbo Nation, and we are bickering as to which of our sons will lead the charge. Our disposition, I dare say is myopic and defeatist.

I have heard corridor talks about passing a resolution to repudiate the selection of Peter Obi as Atiku’s running mate. I hope that those who champion such causes will also have the courage to sign their name to the resolution, so that in the fullness of time our posterity will appreciate our folly.

Mr. Vice-Chairman, the two distinct vagaries of history is that “only victors write history” and that “historians claim to be able to recover the past.” So let me end on a historical note. If we lose the present opportunity to produce the VP due to the whims of a few among us, Ndiigbo will never recover the past. And history will be unkind to us all, myself included. Discretion and circumspection is the word! Let those who have tongues count their teeth correctly. Thanks.